Termini is a small town in a fantastic position, on the tip where the promontory that dirides the two gulfs ends, as its name suggests (“Termine”, means end, in Italian), between two of the most popular coasts in the world: the Sorrento and the Amalfi coast. From here one can discover places full of natural heritage, art, history and culture. The different itineraries make travellers discover old trails where they can enjoy a nice walk. They all start from the Termini small central square 300 m away from VILLA STARACE. 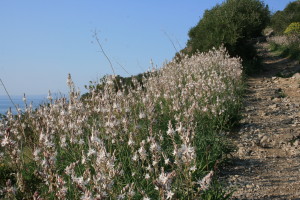 At the end ofthe square in Termini turn right, and after 200 metres leave the road (which continues straight towards Monte San Costanzo) and take the trail going down on the right. This road is the ancient via Minerva and, in the final part, you can still see a part paved by the Romans with the typical stone pavement. If you proceed along this road, you reach the Tip and now Capri is only 5 km away; you are on the ancient Minerva promontory, the place where the Temple of Athena once stood, one of the most popular sanctuaries in the Tyrrhenian coast, founded by Ulysses himself (according to Strabone), and on which we can see the remains of the Minerva Tower, built by Roberto d’Angio, which was used until the 17th century to spot the ships of the Saracen pirates and sound the alarm with a hell (from which the present name derives: “Campanella” means bell in Italian). 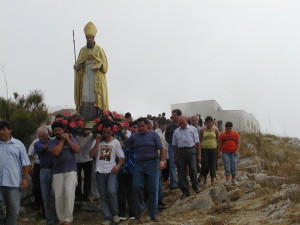 At the end of the square in the village you turn right, like theprerious road, but then you proceed straight. When you reach the Eastern top (485m abore sea level) you will find the chapel dedicated to the saint, dating hack to the 15th century, where you can enjoy the marrellous view overlooking the two gulfs and the Marina di Cantone beach. Every year in mid-May, a characteristic procession of devotees carries on the shoulders the statue of the saint in the chapel of Termini’s church at the top of the mountain. In July the statue is carried back, again in procession to its place of departure, followed by a party with performances and fireworks. 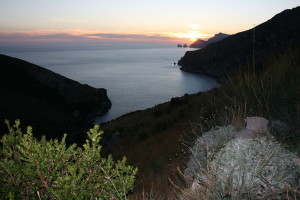 Town of the Preserved Marine Reserve in Punta Campanella: at the end of the square in the town, turn left and walk along the trail leading to Nerano. From the small square, take via Jeranto on the right, which reaches the hay with the same name going through the lands owned by the FAI. Jeranto was a cave where calcareous stone was extracted from, and here you can still see the remains of the industrial settlement, which now has rightly become an archaeological site of the industrial period. Donated to FAI in 1985, the Bay of Jeranto represents the most challenging renoration project ever attempted for the enrironment. Until some years ago it was a rery crowded destination for any kind of boats; today, nobody can reach it from the sea with a motor-propelled boat and this allows risitors to enjoy an unforgettable swim in the crystal-clear water. 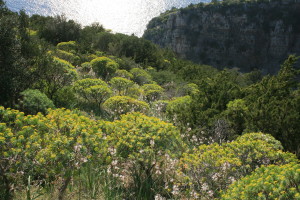 At the end ofthe square in Termini turn and follow the same small road leading to Punta Campanella, but, at the second crossroads, you need to take the trail on the right which reaches the quite little beach with the Chapel of Saint Mary (18th century). Its marvellous position, opposite the Capri Island, and its crystal clear waters make it one of the best inlets of the coast, a must for all tourists who want to have a swim. 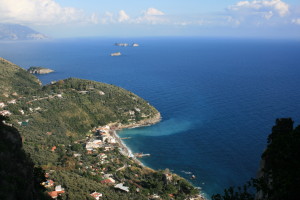 You reach the square in Nerano as in trail n° 3 and some metres after the trail leading to the Jeranto bay, you take another one on the left, and then proceed, always downhill, towards the sea. It is a beach equipped with nice bathing establishments and restaurants of all sorts. Visitors can also rent canoes, motor-propelled boats or go for a fishing-visiting day. From here, you can also walk to another small beach, Recommone, where you can admire, some miles away, the islets “Li Galli”, or “Sirenuse”, small archipelago made up of three islets: Gallo lungo, Rotonda and Castelluccio, considered as the legendary place inhabited by the bewitching Mermaids. The beach in Marina del Cantone, like the town of Nerano, can be reached also by car or buses going stopping at the Termini square. 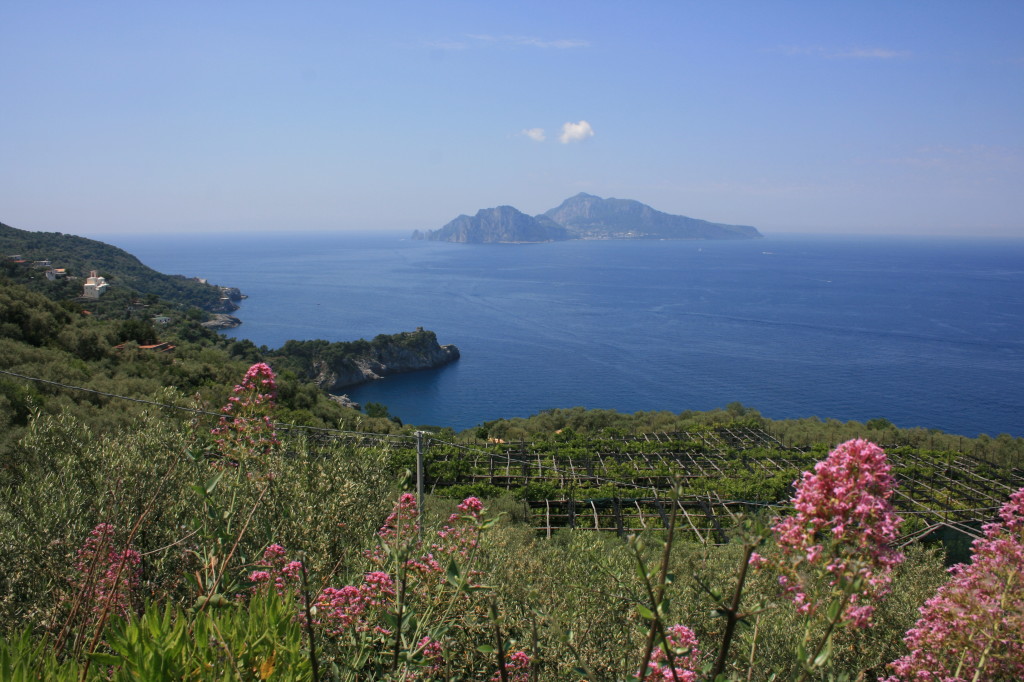 The town of Massa Lubrense consists of 17 districts, which were called hamlets in ancient times, all linked with old trails (the ones we suggested are just a small part of them). For those interested, we have detailed maps of those trails. Now let’s hare a short description of the interesting places which may be reached by car or bus and visited on a one-day trip from Termini. A trip to Capri, which you hare to admire in all parts of the day under different shades from the terraces of Villa Starace, is a must. It may be reached by hydrofoil, from the Sorrento harbour (traditional internationally renowned holiday resort, full of elegant shops and traditional craftsmen’s stores and a lively nightlife) and by the “gozzi” (small double ended fishing boats, typical of this town) learing from the beach of Marina del Cantone (the latter generally stop also at the Grotta Azzurra, the Blue Care). Pompeii and Ercolano are surely very interesting from an archaeological and artistic point of view. A visit to Naples is another must: buy one of the different guides for your visit to the city. If you have time another interesting trip would be the one at the Vesuvius National Park, the Pozzuoli Solfatara and the Caserta Royal Palace. From Naples you may also reach Ischia and Procida by hydrofoil. On the other side, you cannot miss a visit to Positano, Amalfi and Ravello, and you can even reach Cetara, maritime hamlet which kept its ancient atmosphere intact, and Vietri sul Mare, extremely popular for its ceramic production. Unfortunately, this is only a small part of what you may visit, we described only the most renowned resorts, hoping that what we have suggested to see will make you come back many times to see what inevitably could not visit or simply to see, once again the places that, we hope, will become an unforgettable souvenir. We would like to finish quoting Renato Fucini, referring to Amalfi, a statement which may he also extended to this marvellous land:

“per gli Amalfitani che andranno in Paradiso, sarà un giorno come tutti gli altri” (the day the people of Amalfi go to heaven, it will be just another average day).

Distance from Termini (by car)